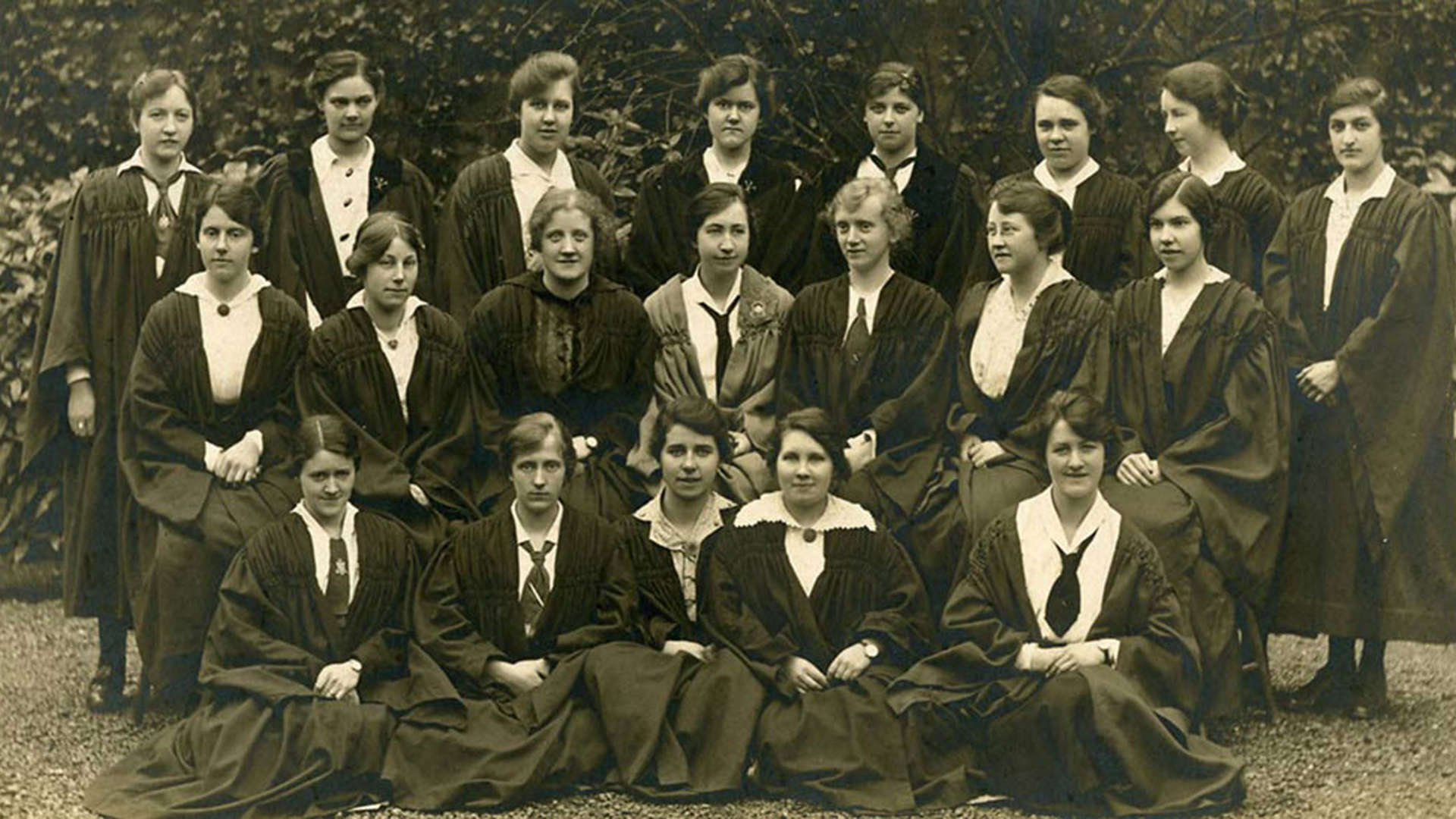 University College, Dundee began giving lectures in Education in 1900, but in 1906 Dundee Training College was established, renamed Dundee College of Education in 1958.

In 1987, it merged with Aberdeen College of Education to form Northern College but in 2001 the institutions split again to become part of their respective universities. Today, the University of Dundee’s School of Education and Social Work is one of the highest rated in the UK, working with many partners in Dundee and internationally.

Drawing of the Technical Institute on Small’s Wynd

Dundee Training College opened in 1906 without a home of its own. Originally it shared premises with the Technical Institute on Small’s Wynd. Responsible for making the building a suitable home was a janitor Alec Tindal, later described as…

...the gentle hand and the master spirit. For 13 years from his wee box on the first floor of that old building he guarded the interests and knew the needs of staff and students alike, an unwearied worker and yet the centre of much happy, social and friendly intercourse.

The building was overcrowded, however and practical classes had to be held at Harris Academy. Director James Malloch embarked on a crusade to have a new purpose built building.

In 1900 James Malloch was appointed the first lecturer in Education at University College, Dundee. He had previously trained in Edinburgh and taught in several Dundee schools from 1885, ultimately as Headmaster of Blackness School.

Malloch had long believed that Dundee should have a teacher training college comparable to those in Edinburgh and Glasgow, and his vision was realised in 1906 when the Dundee Training College was established with Malloch as its first Principal and Director of Studies.

After Malloch’s death it was noted that his “vision, enthusiasm, and tireless energy were largely contributory to the systematic training of teachers in Dundee, and to the ultimate establishment of the large and finely equipped Training College in which the present-day students are housed.”

The college building on Park Place in 1932

The foundation stone of the College’s first permanent home in Park Place was laid in 1912. During the Great War the incomplete building was used as a Red Cross hospital so the opening was delayed until 1920.

Designed to hold 400 students its features included a model flat for teaching housekeeping. There were common rooms for staff and students, although there were separate rooms for each sex and even different staircases for men and women. A distinctive feature of the Park Place building was the ‘bridge of sighs’ connecting the college to the demonstration school next door.

Second Lieutenant James Stewart Chalmers was one of many from the College who were killed during the Great War. He had studied in 1912-13 specialising in Maths and Science, before teaching in schools in Tain and Nairn. As a colleague remarked, “He was a young man with great promise, with intelligence far beyond the average.”

Miss Jeannie Phinn, techer of household management taught in the model flat that was situated on the top floor of Park Place

Situated near Arbroath Road, Mayfield House was gifted to the College by Sir William and Lady Ogilvy Dalgleish and was opened in 1912 as a hall of residence for female students. The hall was extended in 1932 and 1963 allowing it to house students of both sexes.

The building has since been demolished and the site developed as a housing scheme. This painting was done in 1960 by Neil Catchpole, Principal Lecturer in Arts & Crafts at the College 1944-70.

In 1958-59, the Training College was reorganised as Dundee College of Education. Student numbers increased and various extensions were added to the Park Place building.

Overcrowding get worse however and many classes has to be held in temporary portacabins. Eventually it was realised by the Board of Governors that the only solution was a completely new campus on the outskirts of town.

In 1972 the foundation stonewall laid on a new building two miles to the east at Gardyne Road. Costing £4 million, the new College occupied a thirty acre site.

Staff accommodation was provided on the Gardyne Road campus. One tutor recalled, 'it was like a close community, staff and students alike. It felt electric and personal. It was a hub and you had everything there.'

The campus had a strong sense of community, as one student recalled,

"The building itself could have been nicer but the atmosphere was great. You had everything in one place. We used to have some great insights in the union - everybody all together - gardeners, janitors, catering staff, even the pool guy….and of course free parking!"

The building certainly left an impression on the students,

"It felt like a maze - all the corridors were internal and identical. Even after having been there for two months I can still see me standing there perplexed and disorientated wondering what floor I was on."

Threatened with closure, in 1987 the College merged with Aberdeen College of Education to form Northern College. In 2001 the two colleges split again, each becoming part of its neighbouring University. What began as Dundee Training College became the University of Dundee’s Faculty (and later School) of Education & Social Work. The Gardyne Road campus was sold to Dundee College and teaching is now done in the Dalhousie Building, with staff based in the Old Medical School and Carnelly Buildings.

Today, the School of Education and Social work at the University of Dundee continues the long tradition of excellence through its renowned portfolio of undergraduate and postgraduate courses and research which continues to transform lives, locally and globally.

Today, the impact of research at the School of Education and Social Work extends across the world to areas such as the Middle East where Dr Ian Barron's work has transformed recovery programmes for child trauma victims in Gaza and the West Bank.

In the context of ongoing war and conflict in Palestine children are often left devastated by the effects of trauma and anxiety. For the first time, different types of traumatic events children experience under military occupation in Palestine have been identified and quantified.

This research sought to understand children's experiences of trauma in their ‘own’ words and, through training, counsellors developed effective listening and helping skills to allow children to feel more comfortable during trauma recovery programmes.

Thanks to Matthew Jarron, University of Dundee Museum Services.