Poster Club are making a new body of work in the form of posters, stickers and garments for their exhibition Wheat, Mud, Machine in CURRENT. The title quite literally referencing the material properties of the objects represented in the works in exhibition, but also more obliquely to the digital and analogue technologies employed in Poster Club’s production of their art works.

At the heart of Poster Club's practice is a particular relationship with the manual and machinic processes of screen-printing, block printing and digital print. Artist Peter Philips who was employed by Poster Club for an exhibition in 2011 (Eastside Projects, UK) succinctly captured this relationship when he declared,  “I don’t want to be a machine like Warhol, but I like the idea of using one”.

Revisiting previous artworks, utterances and installations, Wheat, Mud, Machine is itself a humorous re-appraisal of Poster Club's own work in a self-styled 'Institutional Self-Critique' – a slogan frequently seen in the works in the exhibition.  Through their elusive and humorously provocative slogans and experimental utilisation of the ‘poster’ in its inherent multiple form, Poster Club’s works embody the plurality and complexity of contemporary cultural practice.

The idea that the exhibition lives on beyond the frame of the museum by moving into the space of people's homes is in keeping with the long-standing tradition of exhibition posters.

In Wheat, Mud, Machine the audience is invited to make their own memento, operating the simple printing station that forms part of the exhibitionand large stamps of Poster Club fonts to make new images or slogans. In keeping with the ethos of an exhibition poster, Poster Club have created the CURRENT poster to announce Phase One of the CURRENT programme, utilising their specially designed ‘finger font’. 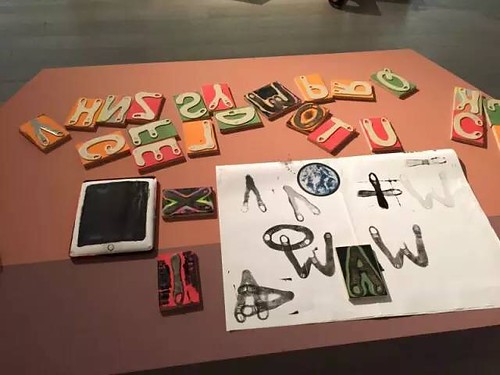 CURRENT |????: Contemporary Art from Scotland is a four-phase eighteen-month contemporary art exhibition and forum programme at Shanghai Himalayas Museum that showcases for the first time in China the distinctiveness of contemporary art made in Scotland, its grass-roots spirit and its keen debates with the social and political dimensions of art and culture. CURRENT |???? is co-curated by Sophia Hao and Wang Nanming.

Poster Club is a group of artists who collaborate on designing and printing posters.  Using the poster format as an open-ended starting point for their projects, Poster Club's primary interest is in using the medium of print as a site for experimental collaborative practice. Poster Club members participating in the week-long residency are Anne-Marie Copestake, Nicolas Party, Ciara Phillips and Michael Stumpf.

They approach the idea of what a 'poster' is, and can be, by creating works that announce their own presence without informing us as to what they might mean.  Instead of 'objective' information, their posters offer elusive statements, open-ended questions and humorous conjunctions. 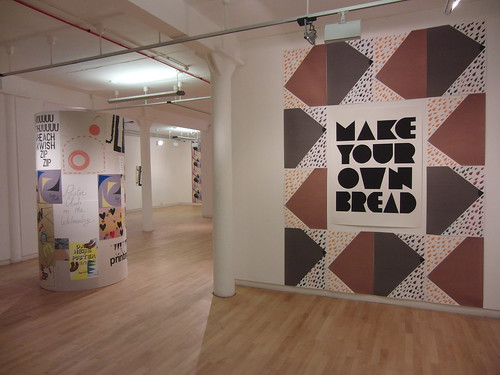 All photos courtesy and copyright of Poster Club.

Poster Club have been kindly supported in the production of their work for CURRENT |????: Contemporary Art from Scotland by Glasgow Print Studio.