RECORD>AGAIN! 40yearsvideoart.de- Part 2 is the second phase of a remarkable project 40jahrevideokunst.de, initiated by the German Federal Cultural Foundation in 2006. Under the direction of ZKM Karlsruhe (Centre for Art & Media Technology), five leading German museums have worked in collaboration for the realisation of the project, which aims to preserve, restore and disseminate one of the most influential art forms of the 20th century; Video Art.

Including many works that have not been seen for decades, the exhibition features over 40 outstanding video pieces made between 1968 and 2008. Highlights include a rare work by Ulrike Rosenbach with her partner at the time, Klaus vom Bruch, the boxing match from 1972 that Joseph Beuys participated in at the documenta 5, and the first video synthesizer collages by Walter Schröder-Limmer.

The exhibition focuses exclusively on the medium of video and the core mission of the project, which is preservation, not canonisation. Many works from the history of video were considered untraceable, lost or no longer playable. The project’s main concern is to save these works from deteriorating while at the same time reconstructing the history of the video movement as a whole. 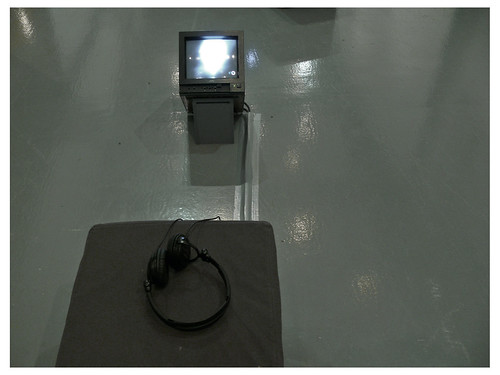 The REWIND: Artists’ Video in the 70s & 80s research project at Duncan of Jordanstone College of Art & Design provides a meaningful context for this exhibition to be shown at Centrespace at Visual Research Centre, DJCAD. The REWIND project through its focus on video works of the 1970s and 1980s provides a resource to address the gap in historical knowledge of the evolution of electronic media arts in the UK. Funded by the Arts and Humanities Research Council (AHRC) it has investigated, conserved and archived over 450 single screen and installation works from the first two decades of artists’ works in video. Building upon the success of REWIND UK, a new funding support from the AHRC enables the project team to embark on REWINDItalia; a 28-month project that explores the important history and narratives of video art activity in Italy between 1968 and 1994.

To book a place for this free event please go to: http://recordrewindinconversation.eventbrite.co.uk/

To accompany this exhibition of an extraordinary selection of video works from Germany, an In-conversation event will take place at the Visual Research Centre of DJCAD; the home of the REWIND research project. Featuring researchers, curators and artists from Germany and Britain, this discursive event provides a unique opportunity to scrutinise the histories of the video art movement in both countries and to unpack the propositions, approaches and outcomes of these two prestigious historic European research projects.

Centrespace, Visual Research Centre is part of Duncan of Jordanstone College of Art & Design and is located on the lower floors of Dundee Contemporary Arts, 152 Nethergate, Dundee.