Here Was Elsewhere: A Memorandum of a Summer in Shanghai

NEW Wheat, NEW Mud, NEW Machine is a major exhibition of new works by Glasgow based artists’ collaborative group Poster Club, which stems from their participation in Cooper Gallery’s international project CURRENT |????: Contemporary Art from Scotland at Shanghai Himalayas Art Museum in summer 2015. The title of the exhibition references the material properties of the objects represented in the exhibition, it also indicates the reflections and annotations that have arisen since the group’s brief encounter with Shanghai.

Printing slogans and symbols onto posters, garments and sculpture, Poster Club position printmaking as an experimental site for collaborative practice. Inscribed with open-ended questions and unlikely conjunctions, Poster Club continually cite, revisit and reappraise their own artworks and utterances to produce a humorous 'institutional self-critique’. Always evading intentional and ‘objective’ statements, NEW Wheat, NEW Mud, NEW Machine is an opening into an elusive play of visual and textual possibility.

At the heart of Poster Club's approach is a particular take on the manual and machinic processes of printmaking. Artist Peter Phillips succinctly captured this relationship when he declared, “I don’t want to be a machine like Warhol, but I like the idea of using one”, a quote which Poster Club used for an exhibition at East Side Projects in Birmingham in 2011. In a rebuttal of Andy Warhol’s now haunting declaration that we are all machines, Poster Club utilise the inherently repetitive processes that define the medium of the poster, to create an art that embodies the plurality, complexity and contingency of contemporary cultural practice and its discursive other; ourselves.

NEW Wheat, NEW Mud, NEW Machine is drawn from Poster Club’s exhibition Wheat, Mud, Machine; a body of works the group developed within the context of CURRENT | ????: Contemporary Art from Scotland at Himalayas Art Museum when the artists travelled to Shanghai for their exhibition and a week-long residency in Summer 2015. Curated by Cooper Gallery in collaboration with curators and art organisations in China and developed in partnership with the British Council, CURRENT is a two year contemporary art exhibition and forum programme in Shanghai that showcases for the first time in China the distinctiveness of contemporary art made in Scotland, its grass-roots spirit and its keen debates with the social and political dimensions of art and culture.

Playing off its Chinese title ???? (Untimely) and drawing upon Roland Barthes succinct aphorism ‘The contemporary is the untimely’, CURRENT questions the political, social and economic discourses that contest this present moment and its apparition as culture. The programme problematizes the fictionality of the 'contemporary’ that revokes the multiplicity of history in favour of a single all encompassing image; now, and explores how art can distinctively re-negotiate the similar yet different relationships that two places, Scotland and China have with the ‘globalised’ world. NEW Wheat, NEW Mud, NEW Machine repositions Poster Club’s exhibition from Shanghai to Scotland, having been reimagined and made anew by the artists through their experience and subsequent reflections on their work in the space of the ‘transnational’. 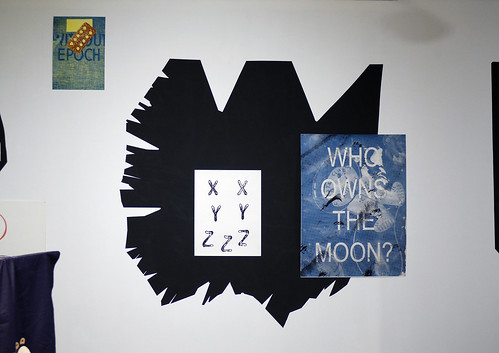 Poster Club is a group of artists who collaborate on designing and printing posters. They approach the idea of what a 'poster' is, and can be, by creating works that announce their own presence without informing us as to what they might mean. Using the poster format as an open-ended starting point for their projects, Poster Club's primary interest is in using the medium of print as a site for experimental collaborative practice.

Tom O’Sullivan (b. Norfolk, UK) Lives and works in Newcastle-Upon-Tyne.  Tom works collaboratively with Joanne Tatham.  Recent exhibitions include: Are You Locationalized, Atlas Arts, Isle Of Skye (2014), Does The It Stick, Bloomberg Space, London (2014), Does The It Fit, Circa Projects, Newcastle (2013), A Tool For The Making Of Signs, Chapter, Cardiff (2012).

Michael Stumpf (b. Mannheim, Germany) lives and works in Glasgow.  Recent exhibitions include: Objects Converse On A Matter Of Mutual Concern, Art Across The City, Swansea (2015), This Song Belongs To Those Who Sing It, Mackintosh Gallery, Glasgow School Of Art (2014), In My Eye, Pipe Factory, Glasgow (2014), 157 Days Of Sunshine, The Walled Garden, Glasgow (2013); Last Chance, Swg3, Glasgow (2012).

Poster Club have been kindly supported in the production of their work for NEW Wheat, NEW Mud, NEW Machine by Glasgow Print Studio.

NEW Wheat, NEW Mud, NEW Machine is an exhibition that includes work developed by Poster Club for CURRENT |????: Contemporary Art from Scotland, with the support of the British Council, British Council China, China-UK Connections through Culture, The National Lottery through Creative Scotland, Scottish Government and Goldsmiths College, University of London.

Open: Monday - Friday 10am-5pm, Saturday 11am-5pm, Sunday Closed, and can be accessed via the Cooper Gallery doors on the right side of DJCAD.

Cooper Gallery will be closed on Saturday 2nd, 9th & 16th April due to University building closure between teaching semesters.