Half the world’s population live and work in cities. Infused with the poetics of the mundane and the political, urban space is seemingly the single common experience that underscores how we relate ‘en masse’ to the world and each other. Offering paradoxical visions of the cornucopia of concrete, glass and steel that straddles the world, Politics of Small Places  forges a unique dialogue between preeminent contemporary artist and Turner Prize nominee Paul Noble and pioneering Scottish urban planner Patrick Geddes (1854 – 1932).  Bringing together Noble’s  unsettling  encyclopaedic depictions of urban blight  with Geddes’ principle to ‘think global act local’ that calls for  global consciousnes  and civic participation, the exhibition asks urgent questions on sustainability, social struggle, and collective effort.

Casting a stark light on the existential consequences of global urbanisation in the 21st century and drawing attention to the languages and metabolic processes that determine the modern city, Geddes and Noble offer contrasting imaginaries of urbanised space. For Geddes, with his famous valley section diagrams, which was based on the landscape and livelihoods of Dundee, city life is irrevocably tied to the landscape it sits within. In Noble’s drawings this symbiotic relationship between nature and the urban is revoked. Blending craft with carnivalesque, Noble’s urban depictions juxtapose social conscience with an acute humour to draw a world that is both austere and decadent. 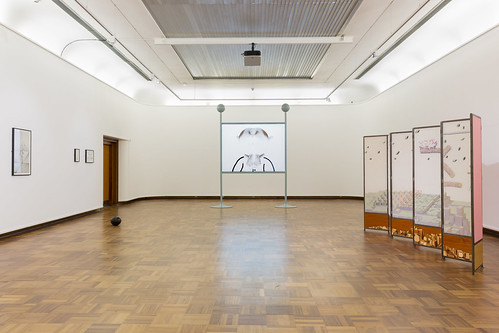 The exhibition comprises Noble’s Nest  (2004) and Eggface (2014) accompanied by a suite of drawings from which  Nest  is derived. Modelled on an East Asian folding screen with intricate embroidery and marquetry,  Nest portrays a deserted urban environment of egg carton buildings, which resonates dissonantly with Le Corbusier’s ‘machines for living’, beside a dead tree. Eggface,  a sculpture and film projection, reveals a woman giving birth to a large black plastic egg. Forming a recurring motif in Noble’s work, the egg  indexes the artist’s philosophical take on the paradoxical cycles of birth, death and waste that stand as  the genesis and foundation  of all life and indeed of our  society itself.

Alongside Noble’s  works  will be eight original diagrams selected from the Geddes Archive Collections at the University of Strathclyde. Part of Geddes’ ‘thinking machines’, an immense body of diagrams and  notes drawn in red and blue crayons during his lectures,  these works  explicate how different environments figure in the formation of social groups and their collective consciousness. Today Geddes’ work provides the means to look again at the urban spaces in which we subsist, consume and struggle.

As part of Cooper Summer Residency 2018, Noble will engage in a four-week written correspondence with Lorens Holm, Director of Geddes Institute for Urban Research at the University of Dundee. This will culminate in a public event at the exhibition preview on 13 September. Featuring Noble, Holm and Dr. Louise Reid, researcher in Sustainable Development and Geography at the University of St Andrews, the event will explore current debates on  urbanisation alongside ideas of  social and environmental justice.

The In Converstation is free. Tickets available via Eventbrite. 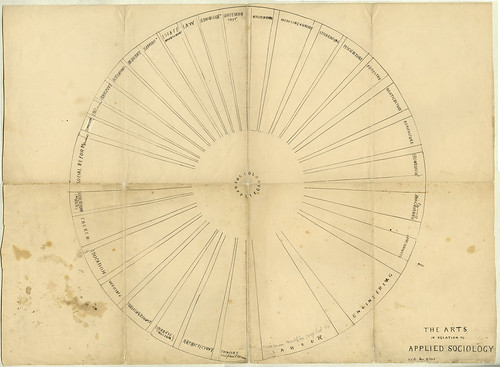 Paul Noble is a contemporary artist forging a unique and maverick path in the ebullient British art scene. He received widespread international recognition for his vast and monumental drawing project, Nobson Newtown, which he began in 1996. Drawing image after image, story after story—at once architect and town planner, archaeologist and cartographer, social historian and activist, creator and destroyer—Noble has invented and described a melancholy urban vision somewhere between Le Doux’s revolutionary utopias, Sim City, and the post-holocaust wastelands pictured in the daily media. A meticulous and dedicated draftsman, Noble creates dizzyingly elaborate encrypted schemes, drawing from inspirations as diverse as ancient Chinese scrolls and Japanese sculptures, Fabergé eggs and brick walls, eighteenth-century pornography and animal rights, Hieronymous Bosch and Oyvind Fahlstrom. The sheer level of detail in his drawings defies the capacity of the eye to see and the mind to fully grasp them.

Sir Patrick Geddes was a biologist, sociologist and town planner with a strong interest in education, the arts, history and many other subjects. He believed strongly in the inter-relationships between all branches of knowledge. Geddes grew up and was educated in Scotland, and studied biology in London. After a professional career as a biologist in London and France, he settled in the late 1880s in Edinburgh, where he became involved in the regeneration of the Old Town. In 1889, Geddes became Professor of Botany at Dundee University College. In the ensuing decades, Geddes developed a highly individualistic theory of human societies and their spatial manifestation in the city and in the country, drawing upon theories in biology, geography, philosophy and politics. In 1904, Geddes published his first major report, City Development: a study of parks, gardens and culture institutes, which enhanced his reputation among architects and planners. From 1914-1924, Geddes lived mainly in India, where he was involved in town planning. He accepted the Chair of Sociology and Civics at the University of Bombay in 1919. At this period, Geddes designed the Hebrew University in Jerusalem, garden suburbs for Jerusalem and Haifa, settlements elsewhere in Palestine, and the master plan for Tel Aviv. After his return to Europe in 1924, Geddes settled in Montpellier, France, where he founded the Scots College as an International University to propagate his ideas. He was knighted in 1932 and died at Montpellier.

Dr. Lorens Holm is Reader in Architecture and Director of the Geddes Institute for Urban Research at the University of Dundee. At Dundee he runs the Rooms+Cities design research unit, which uses architectural theory to open up a space for designing new forms of city and social life. He has taught at the Architectural Association, the Bartlett, the Mackintosh, and Washington University in St. Louis. He is a registered architect in the UK and the State of Massachusetts. His teaching/research focuses on the thought threads that link architecture to philosophy, history, psychoanalysis, and machines. Publications include Brunelleschi Lacan Le Corbusier: architecture space and the construction of subjectivity (Routledge 2010) and, with John Hendrix, Architecture and the Unconscious (Routledge 2016). His papers have appeared in The Journal of Architecture, Perspecta, Critical Quarterly, Architecture Theory Review, and Assemblage. He is currently organizing an international interdisciplinary conference on cities and the collective social formations that inhabit them.

In 2015 the Geddes Institute for Urban Research curated The City is a Thinking Machine, an exhibition and associated events that sought to evaluate the relevance of Geddes’ thought for today by situating it alongside the work of contemporary practice.

Dr. Louise Reid is a social scientist interested in what and why people do what they do, and the impact of these activities on the environment. As a human geographer, she explores how these activities are organised across time and space with a focus on the everyday domestic setting. Louise is currently based at the University of St Andrews in the School of Geography and Sustainable Development where she contributes to the successful MA/BSc Sustainable Development, MA/BSc Geography, and MSc/MRes Sustainable Development programmes. Louise is also Director of the University’s Centre for Housing Research. Louise moved to St Andrews from the University of Aberdeen in 2010, initially taking up a research fellowship with CHR, before moving into a Lectureship in 2011. Louise completed her PhD in 2010 and also has an MSc in Sustainable Rural Development (2004) and an MA (Hons) in Environmental Geography (2003).

Cooper Gallery would like to thank the University of Strathclyde Archives and Special Collections for their invaluable support of this exhibition.

This exhibition is kindly supported by James Keiller Investments.

This exhibition is kindly support by James Keiller Investments.