Knife Edge Press: The Complete Works (so far) will showcase the critically celebrated artists' books produced to date by Knife Edge Press, the creative partnership of writer Mel Gooding and artist Bruce McLean. Alongside the artists’ books the exhibition will also present for the first time, prints, posters, correspondences, photographic documentations and other ephemera generated during the twenty-eight years of creative exchange and collaboration.

To coincide with the exhibition Mel Gooding and Bruce McLean will undertake an Invisible Residency as part of the annual Cooper Summer Residency programme to inscribe a daily visual and textual dialogue into the Cooper Gallery. For more information please see Invisible Residency.

Gallery Assistants and audience members share their responses via Cooper Gallery Notes which was showcased as Cenrtal Station's Featured Blog on 10 September 2013: http://thisiscentralstation.com/featured-blog/cooper-gallery-blog/ 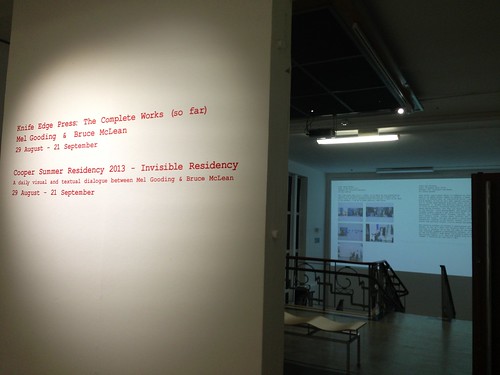 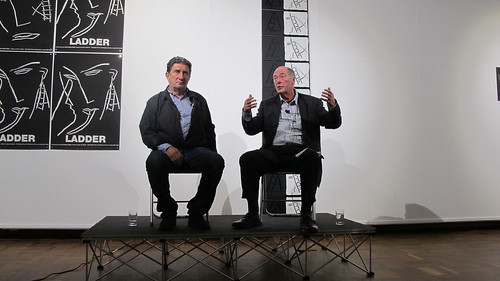 Photographs taken during the In Conversation between Mel Gooding and Bruce McLean at the Preview, 29 Aug, 2013.

The publication is a must-read for anyone interested in Bruce McLean's practice or his long-standing collaboration with Mel Gooding. If you are interested in purchasing a copy for £10 plus P&P through Cooper Gallery please email exhibitions@dundee.ac.uk for more information.

Mel Gooding is an art critic, writer and exhibition organiser. Gooding has written many catalogue texts? and has contributed extensively to the art press, and to? magazines and newspapers. His monographs on artists? include Bruce McLean (1990), Michael Rothenstein’s? Boxes (1991), Patrick Heron (1994), Gillian Ayres (2001),? Ceri Richards (2002), Patrick Hayman Visionary Artist? (2005), John Hoyland (2006) and herman de vries: chance ?and change (2006). He has also written on architecture, ?and on general art topics including William Alsop Architect ?(1992), Joze Plecnik: The National and University Library,? Ljubljana (1997); Public: Art; Space (1998); Abstract Art ?(2001); Song of the Earth: European Artists in the ?Landscape (2002).

Bruce McLean is one of the major figures of contemporary British Art. Born in 1944 he studied at Glasgow school of art and at St. Martin's in London, where he was taught by Anthony Caro. All his work brilliantly sent up the pompousness of the art world and mocked established art forms. He was given an exhibition at the Tate Gallery at the age of 27. From the late 1970s he has made paintings and prints in which humour remains central.

After St. Martin's McLean went on to teach at The Slade School of Fine Art. His early reputation arose from his activities as a sculptor involved in performance art. He has obtained international recognition for his paintings and prints, work with film theatre and books. McLean's bold and confident approach to print making proved influential to his contemporaries and also to a generation of younger artists.

McLean's work is in private and public collections world-wide and he has had numerous one man shows in both Europe and North America. These include The Tate Gallery, the Modern Art Gallery in Vienna, The Museum of Modern Art Oxford and the National Galleries of Scotland. Bruce McLean was awarded the John Moores prize for painting in 1985, and was the Head of Graduate Painting at the Slade until 2010. He lives and works in London.

Cooper Gallery would like to thank Eagle Gallery / EMH Arts in London for their kind support to the exhibition.

Knife Edge Press: The Complete Works (so far) and Invisible Residency are part of Impact 8 International Printmaking Conference: A celebration of interdisciplinarity and exploration through the medium of print. For further details of Impact 8, please see their website.

Cooper Gallery is located in the Crawford Building, DJCAD.