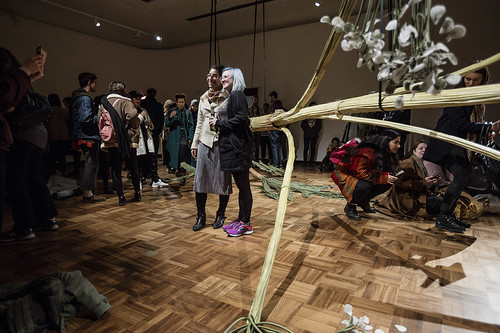 Preview Event of We Thrive photography by Ross Fraser McLean 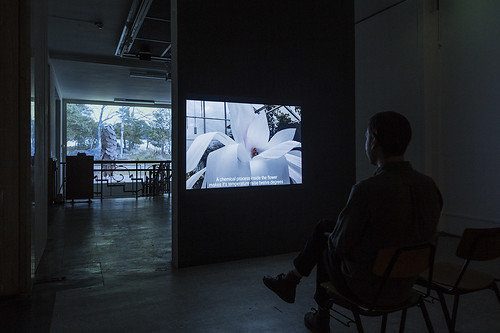 Cooper Gallery is pleased to present the first UK solo exhibition of Swedish artist Ingela Ihrman, We Thrive. Drawing upon a poetic absurdism characterised by craft and amateur theatrics We Thrive contests and subverts how we see and interact with nature. Featuring a giant hogweed, intestines, a giant otter giving birth before a human gaze and a toad doing gymnastics, Ihrman’s artworks index debates on our complex and problematic relationship with invasive species and the anthropomorphising of the animal kingdom.

Nature, that vast fecund belly from which all things come, including ourselves, is often portrayed, to use the poetry of Tennyson, as being ‘red in tooth and claw’. The obverse of this savage image is the depiction of the natural world as ‘the great outdoors’, a landscape rich in daydreams of play and discovery. However, these fictions which place nature as being diametrically ‘other’ to culture are, in a contemporary world defined by climate change, practices of re-wilding and conservation, increasingly untenable. It is to this moribund imagery that the work of Ingela Ihrman speaks with an urgent voice on the incontestable condition of nature as the abiding crucible of ‘reproduction’.

Encompassing performance, crafted object and moving image, We Thrive is an opportune exhibition in which to rethink how society situates, codifies and relates to the world around us. Developed from research into flora, slime and fertility and her recent fieldwork on the Isle of Eigg, Ihrman’s Cooper Gallery exhibition questions the ability to thrive that all life carries; an ability that is governed by and dependent upon not only environmental conditions, but more importantly how culture portrays and understands nature and thus itself.

Rapidly gaining international recognition, Ihrman has in the past few years come to the forefront of a growing and radical reconceptualisation of nature with installations, writing and performances at the Latvian Centre for Contemporary Art (2015), the Tensta konsthall (2016) and at the 11th Gwangju Biennial: The 8th Climate (What does art do?) (2016).

Seen through the lens of ethnobiology, the scientific study of dynamic relationships among peoples, biota, and environments, Ihrman’s practice aspires to open up alternative ways of ‘being with’ the multiple non-human worlds endlessly thriving inside and outside culture. In taking up this position, Ihrman calls for a new politics that is fundamentally invested with a care for what is stereotypically classified as invasive, abnormal and other.

Ingela Ihrman (b. 1985) is an artist based in Malmö. Her practice moves freely between performance art, installations, and writing. The use of costumes and staged situations are reoccurring elements in her presentations, such as bringing creatures into life while giving birth or bringing flowers into bloom. Ihrman’s work is characterized by tactile craft techniques, hobbyism and poetic absurdism, and in its making borrows from amateur theatre as well as from science. Limiting norms, notions like loneliness and belonging, and relations between different life forms are discussed within her work.

Recent exhibitions include The Inner Ocean, der TANK, Institut Kunst, FHNW Academy of Art and Design, Basel (2017), and Future Flourish at Tensta Konsthall, Stockholm (2016). She participated in the 11th Gwangju Biennale, The Eighth Climate (What does art do?) (2016); The Swamp Biennal, Art Lab Gnesta (2016); Survival K(n)it 7, Latvian Centre for Contemporary Art, Riga (2015) among others. In 2017, Ingela made set design and costume for IMMUNSYSTEMET, a dance performance by Rosalind Goldberg, Sandra Lolax and Stina Nyberg. She is currently working on a theatre play with director Maja Salomonsson that will premiere at Ögonblicksteatern in Umeå, Autumn 2018.

This exhibition is kindly supported by iaspis, The Swedish Arts Grants Committee’s International Programme for Visual and Applied Artists.