Le Cerveau Affamé (The Hungry Brain) is a place. It is also a game that one may or may not be invited to play. The entrance into Le Cerveau Affamé is via a set of cards, each selection proposes a different journey.

The Cooper Gallery is proud to present Before Le Cerveau Affamé, a space for metaphysical transformation, by Georgina Starr, one of the most original and distinctive British artists celebrated internationally since the 1990s for her magically complex and multi-layered works.

Developed especially for the Cooper Gallery’s unique architectural setting, Starr offers a glimpse into ‘Le Cerveau’ and introduces us to its main motifs, the four suits of ‘The Brain’, ‘The Bubble’, ‘The Cat’ and ‘The Hand’.

An abiding preoccupation of Georgina Starr has been the conception of other possible worlds, but these worlds are more than just the creative imaginings of an artist. Imbued with inexplicably emotive renderings of her own languages and characters, Starr’s work is an intense and introspective cosmology. Folding together fiction, history, philosophy and spiritualism, Starr illuminates a vast topology of the self, haunted by the medium of her own voices. Deep within this murmur the inherently speculative truth of biography is endlessly transformed, propelling the self into an abyss held fast between what was, is and could be.

Starr’s practice of combining fiction, memory and a baroque sensibility defies the tight categories of most forms of exhibition making. Yet this is the strength of her work. Sidestepping simple readings informed by common understandings of sculpture, film, drawing or installation, Starr’s disruption and melding of forms unplugs the possibility of there being an everyday. It is this unsettling move that drives the viewer to a radically different understanding of the self and its limitless biographies.

Starr’s work was once described by the Guardian art critic Jonathan Jones as one of  “the most intense encounters we have with art”, while Starr herself has said about her new work,  “I imagined myself like Faust entering the Realm of the Mothers: "The Mothers! Mothers! These goddesses exist beyond the range, of mortals: even we avoid their name. To find them, you must fathom the abyss." The cards were my route into this realm, but The Pink Material is the potion ingested to secure a passage through to the other side. An alchemical process takes place when you chew it. Many bubbles have to be blown before you can enter.”

Georgina Starr originally studied Ceramics and Sculpture and went on to make large-scale installations incorporating video, sound and performance. Over the last twenty years her works have been shown at Tate, MOMA New York, Museum of Contemporary Art Sydney, Kunsthalle Zurich, Kunsthalle Vienna, Venice Biennale and in many galleries and museums worldwide.

There are three monographs published on her work Georgina Starr, Ikon Gallery (1998), The Bunny Lakes, Emily Tsingou (2002) and I am a Record, le Confort Moderne (2010). Starr has also produced many artist editions, vinyl records and books.

The Book Launch of Starr's new Artist's Book The History of Sculpture will be held in Cooper Gallery on Thursday 28 November from 6.30pm. This will follow a satellite event to Georgina Starr's exhibition; A Salon of the Voice, Thursday 28 November 5.30-6.30pm. A Salon of the Voice will be hosted by Ella Finer and Alex Hetherington. For more details on these Events please see the Event Page: http://www.dundee.ac.uk/djcad/exhibitions/events/a-salon-of-the-voice/ 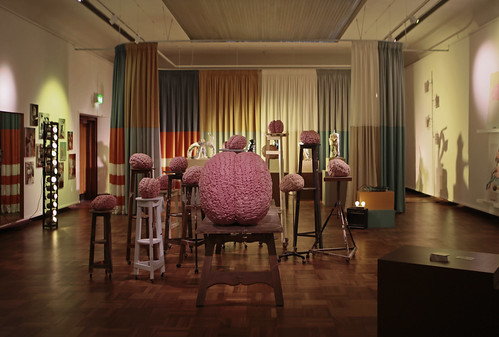 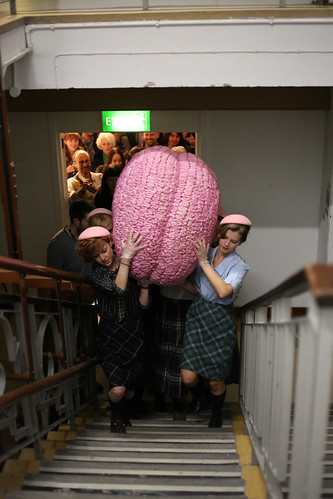 Photographs and video documentation of the exhibition and the Opening Ceremony held during the Preview 10 Oct, 2013.

Photographs by Alan Hillyer and Ross Fraser McLean. Courtesy of the artist.

Cooper Gallery would like to kindly thank the following for their support: