Surplus Cameo Decor is Edgar Schmitz’ first solo exhibition in Scotland. Expanding on recent works that explore how best to withdraw from the present, Schmitz will install a series of ambient backdrops in Cooper Gallery that turn the space into a semi-fictional hub for cinematic plots and invited cameo appearances.

The exhibition is organised in three episodes:

episode 1, palasthotel, is named after an East Berlin hotel in the German Democratic Republic of foreign travel under StaSi surveillance, from which it borrows a bronze tinted window finish. 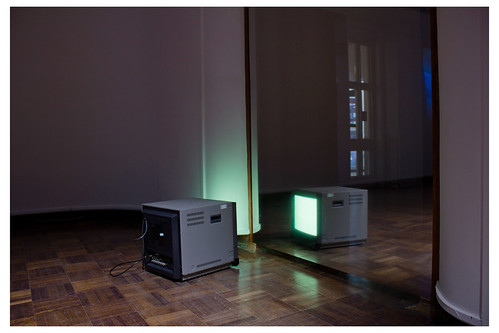 episode 2, horizontes soroa, is set in the swimming pool of a remote Cuban resort, under refurbishment in the early 2000s. 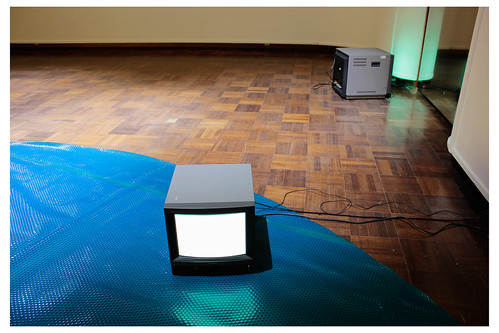 episode 3, sindanao, takes its title from the fictional South China Sea island in a 1986 Ulli Lommel horror movie, and is set in 2017 just before the opening of the M+ super-museum in Hongkong’s West Kowloon Cultural District.

Each of the episodes plays out between the exhibition as readymade set-up and the mirage of projected elsewheres. They are punctuated with cameos by international protagonists who appear against the backdrop of the exhibition as sprawling set, including Tobias Berger (M+, Hong Kong), Lisa Le Feuvre (Henry Moore Institute, Leeds), Ulli Lommel (Los Angeles/ Berlin), and Wang Nanming (Shanghai).

See images from the Cameos as they happen here: 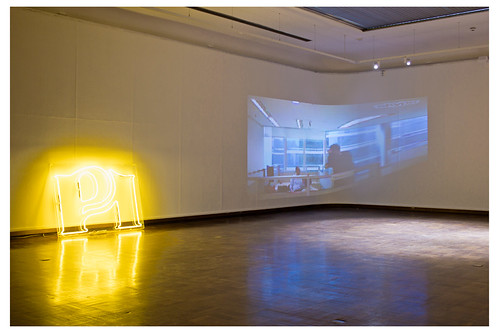 Schmitz’ work mobilises gallery settings toward film by orchestrating the way they oscillate between material, atmospheric and narrative promises. Across a diverse body of work including sculpture, sound, animation and writing, his sub-filmic clusters act as portals into and escape hatches from the exhibition as event. Recent exhibitions of his work include British Art Show 7: In the Days of the Comet, Hayward Touring (2010/11), extra added bonus material, FormContent, London (2010), Dictionary of War, Steirischer Herbst Graz (2006); A-C-A-D-E-M-Y, Vanabbemuseum Eindhoven (2006); and Liam Gillick: ‘Edgar Schmitz’, ICA London (2005). Schmitz has also contributed to Kunstforum International, Texte zur Kunst, Artforum International and numerous exhibition catalogues, and is writing a book on the notion of ‘ambient attitudes’. He is a senior lecturer in Fine Art at Goldsmiths, University of London, and lives and works in London.

HUBS AND FICTIONS.  A Touring Forum on current art and imported remoteness.

Hubs and Fictions is a satellite to Surplus Cameo Decor by Edgar Schmitz at Cooper Gallery. The forum stages questions after the status of exhibition narratives and the broader milieus they claim as their own. Bringing together contributors from the fields of artistic, curatorial and cinematic practice the forum takes place as an exchange in stages at three venues across the UK (Cooper Gallery, Dundee, 30 November, 2 - 5pm; BALTIC, Gateshead, 4 December, 2 - 5pm; Goldsmiths, London, 6 December, 3 - 6pm).

For images of HUBS AND FICTIONS please see this: http://www.dundee.ac.uk/djcad/exhibitions/events/hubs-and-fictions/

The project is kindly supported by The National Lottery through Creative Scotland, The Henry Moore Foundation, Goldsmiths University of London and BALTIC Centre for Contemporary Art.