Salon with Lynda... Event Series (please follow the links to learn more and book a place for the free events)

Dear Lynda … is an international touring exhibition that considers the maverick British curator, writer, art historian and patron Lynda Morris’ ongoing endeavours and contributions in contemporary art since the 1960s. Consisting of artworks, artefacts, catalogues, posters, correspondences and other ephemera drawn from Morris’ personal archive and collections, the exhibition records Morris’ encounters and collaborations with a remarkable group of artists of our time, including Gilbert & George, Richard Hamilton, John Baldessari, Art & Language, Marcel Broodthaers, André Cadere, Stephen McKenna, John Wonnacott, David Lamelas, Bernd and Hilla Becher, Marcel Broodthaers, Gustav Metzger and Nigel Henderson among many others. This unique body of material stems directly from her work with artists and the social, political and cultural context animating her activities.

The Dear Lynda… zine presents a collection, reflection and review of materials held in the International touring exhibition Dear Lynda... This 3rd Edition was published by Cooper Gallery, DJCAD, Dundee on the occasion of the Dear Lynda... exhibition.

The A4 zine includes a conversational text by Lynda Morris, which guides us, like an inspiring novel, through her friendships with artists and her life in the art scene. Across 96 pages that include photographs and documentation, the zine catalogues Lynda Morris's personal journey, beginning with a chance encounter with the Rolling Stones in 1962, and leading to Marc Camille Chaimowicz's exhibition Jean Genet...The Courtesy of Objects, in 2012 at Norwich University College of the Arts, where Morris is Professor of Curation.

Contact Cooper Gallery to purchase your copy of the zine (at £6 plus £2 P&P) please email: exhibitions@dundee.ac.uk.

Watch Lynda Morris In Conversation with David Rushton, part of the Summerhall's Face to Face programme. The programme was produced on the occasion of Dear Lynda... exhibition at the Cooper Gallery, Duncan of Jordanstone College of Art & Design, March 2013.

Documentation of the Salon with Lynda... Event Series 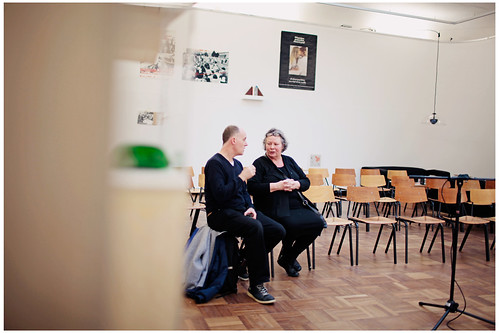 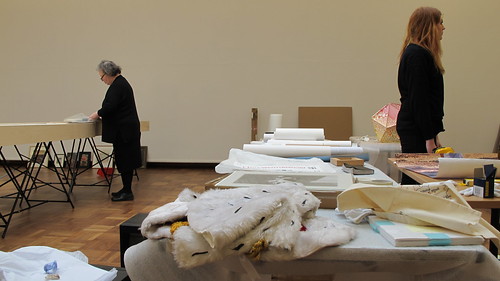 With her politics and passion Lynda Morris is respected as ‘the artists’ curator’ who has given many artists their first exhibitions. In 1991 acting on a desire to break open the boundaries of a London-centred art scene, Morris established EASTinternational, an open submission exhibition in Norwich. EAST became rapidly responsible for launching the careers of many artists, including Jeremy Deller, Matthew Higgs, Hurvin Anderson, Lucy McKenzie, Karla Black and Corin Sworn, and turned Norwich into a recognised international hub for contemporary art.

Reverberating throughout Morris’ career is an interest in conceptual art and socio-political issues, evidenced in her Picasso exhibition Peace and Freedom at Tate Liverpool in 2010, in which Morris presented a unique angle that looked at Picasso's ties with politics and the influences they had on his art. In a similar tone Morris’ current exhibition Documenting Cadere, 1972 - 1978 at Modern Art Oxford, depicts the ongoing relevance of André Cadere’s position on ‘space and politics’.

The exhibition at the Cooper Gallery features an audio interview with Lynda Morris by curator Sophia Hao, accompanied by an autobiographical ‘zine. Opening with the Rolling Stones, the ‘zine illustrates Morris’ beguiling adventure in the art world which, as Morris put it,  “has never been a job, just the perfect way of life”.

Specially conceived as an addition for its Cooper Gallery presentation, Dear Lynda … includes an audio interview with André Cadere by Lynda Morris in 1975 and David Lamelas’ 1972 film Filmscript, in which Morris is featured. As part of the exhibition programme, Cooper Gallery is also delighted to present Salon with Lynda… a week long series of events featuring Lynda Morris and invited speakers, which will open with a captivating talk by Morris on Drinking with Gilbert & George 1972 – 76.

Dear Lynda…originated at White Columns NYC and is on tour to Chelsea Space London, Cooper Gallery Dundee, Norwich University of the Arts and BQ Gallery Berlin.

Lynda Morris is Professor in Curation and curator of the Norwich Gallery at NUA and the EASTinternational exhibition, which has been held over the last 20 years bringing 25 artists a year to work in Norwich. The programme over the last 30 years has included work with Peter Doig, Neo Rauch, Jeff Wall, Lawrence Weiner, Richard Long, Marian Goodman, Peter Kennard, Gustav Metzger and Konrad Fischer.

After studying at Canterbury College of Art, she worked at the ICA 1969 to 1972 on exhibitions including When Attitudes Become Form and Ed Kienholz 10 Tableaux. She then worked for Nigel Greenwood 1971 to 74 organising the first exhibition of Artists’ Books, Book as Artwork 1960 / 1972 with Germano Celant (republished in 2010). She was Richard Hamilton’s assistant for his Guggenheim retrospective in 1973 and wrote an MA (by thesis) at the RCA on the future of Art Education, based on Art & Language in Coventry, Joseph Beuys in Düsseldorf and The Projects Class at Nova Scotia College of Art and Design in Canada. The latter was the model for her Visitors Programme at the Slade School of Fine Art with projects by Dan Graham, Marcel Broodthaers, Gilbert & George, Joseph Beuys and Barry Flanagan. She organised the first exhibition of Minimal Art in the UK, STRATA, 1973 at the RCA. The Agnes Martin works were brought to SNGMA together with David Brown 1974.

Between 1976 and 1980, Morris organised exhibitions at the Midland Group in Nottingham including the first UK shows of Gerhard Richter, Robert Mapplethorpe and a curatorial project with R. B. Kitaj and John Szarkowski. She has just curated Documenting Cadere 1972-78 at Modern Art Oxford, touring to Mu.ZEE Ostend and Artists Space New York. In 2012 Morris curated the Vanley Burke exhibition By the Rivers of Birminam of photographs of the Handsworth Jamaican Community. She edited the Special issue of Third Text magazine British Art and Immigration 1870 to the present day No. 11, 1990. She is continuing to work on Picasso and Africa after 1945. She curated the Tate Liverpool exhibition Picasso: Peace and Freedom on Picasso and Communism after World War Two. It travelled to the Albertina in Austria and the Louisiana in Denmark. The research began in the late 1970s with A.I.A.: Story of the Artists' International Association, 1933-53held at Modern Art Oxford in 1982 with a national tour which included the Fruitmarket Gallery, Edinburgh in 1983. That in turn was inspired by her Paisley born Grandmother who was helping the Spanish Civil War Organisation in London and was a member of Wal Hannington’s Unemployed Workers’ Movement. As a curator, historian and tutor she edited Unconcealed: The International Network of Conceptual Artists 1967-77 - Dealers, Exhibitions and Public Collections after the death of her PhD student Sophie Richard with Ridinghouse/Karsten Schubert 2009 and Conception, Conceptual Documents 1968 to 1972 with Catherine Moseley in 2000.

Lynda was born in Gourock, Renfrewshire in 1947, grew up in Dover and has two children.

Information about the Salon with Lynda… guest speakers:

Simon Groom graduated with a degree in English Literature from Edinburgh University in 1989 before spending a year living and working in Japan and three years in Italy. In 1994 he returned to London to complete a Doctorate in Art History at the Courtauld Institute of Art in 1999. For three years he worked as the curator at Kettle’s Yard, Cambridge, where he curated, amongst other shows, the first UK retrospective of Mono-ha. In 2003, he was appointed Head of Exhibitions at Tate Liverpool, where he curated numerous exhibitions of modern and contemporary international art, including The Real Thing: Contemporary Art from China in 2007, as well as leading Tate’s acquisition strategy in Asia. In November 2007 he was appointed Director the Scottish National Gallery of Modern Art, Edinburgh.

Graham Fagen is an artist who lives in Glasgow. He graduated from the The Glasgow School of Art in 1988 and the interdisciplinary MA in Art & Architecture from the Kent Institute of Art and Design in 1990. In 1991 he was selected for EASTinternational. He works in a variety of medium ranging from sculpture and print making through to video and photography. He works with what he describes as ‘cultural formers’, things that form our cultural identity and how in turn, that forms us. His international exhibitions including the Busan Biennale, South Korea and the Art and Industry Biennial, New Zealand, as well as being part of Zenomap, Scotland and Venice at the 50th Venice Biennale. In Britain he has exhibited at the Victoria & Albert Museum, Tate Britain and the Institute of Contemporary Art, London and in 1999 was invited by the Imperial War Museum, London to work as the Official War Artist for Kosovo. In Scotland he has made new versions of Burns song’s such as The Slave’s Lament, which he exhibited in his solo exhibition Clean Hands Pure Heart at the Tramway, Glasgow. And in 2006 he collaborated with theatre director Graham Eatough and curator Katrina Brown to produce Killing Time, an exhibition between art and theatre, at Dundee Contemporary Arts, and worked again with Graham Eatough on The Making of Us for the Glasgow International Festival of Visual Art in 2012.

Alexander (Sandy) Moffat RSA is an artist, teacher and curator. Born in Dunfermline in 1943 he studied painting at Edinburgh College of Art.

His portraits of the poets of the Scottish Renaissance movement now hang in the Scottish National Portrait Gallery and his works are represented in many public and private collections including the Yale Center for British Art, USA and the Pushkin Museum in Moscow.

His recent book 'Arts of Resistance' co-authored with Alan Riach, Professor of Scottish Literature at the University of Glasgow, explores the impact of artists and writers on 20th century Scotland.

EASTinternational was a highly influential annual and then biennial open submission exhibition which ran from 1991 to 2009 in Norwich. EASTexhibitions were capable of defining the arrival of a new generation of artists with new attitudes towards making art. EAST’s democratic structure, with no rules of exclusion, allows artists to tell us what is going on. The selectors’ choice reflects what they learn from looking at more than 11,000 images of artists work from more than 30 countries. The EASTdiscourse was held between the selection and the exhibition opening, bringing all the artists together so they have the same information as the selectors and the curator. Applications from over 1,000 contemporary artists were received each year with approximately 25-30 artists selected to exhibit. Many artists who are now recognised as important figures had one of their first major public showings at EAST including Martin Creed, Jeremy Deller, Alexander Guy, Matthew Higgs, Kenny Hunter, Runa Islam, Lucy McKenzie, Corin Sworn and Tomoko Takahashi.

Cooper Gallery is on Level 2 of the Crawford Building, DJCAD.

Please note this exhibition has special opening hours. It is open Monday - Saturday between 11am and 4pm (except Saturday 30 March when the gallery is closed).