Cooper Gallery are pleased to announce the first major exhibition in the UK of preeminent German conceptual artist Anna Oppermann (1940 -1993).

Stretching and reaching out from the corner of a room, a dizzying array of images, words and objects grasp the eye and the mind with an embrace intense enough to cause vertigo. Almost visually feverish in its multiplication of associations and connections, the work of Anna Oppermann can appear impossibly complex.

Composed of hundreds and often thousands of drawings, paintings, photographs, texts, slogans and objects, Oppermann’s distinctive art works lay bare the process of perception, awareness and the very practice of thinking itself.

To name her manifestly expansive sculptural situations and to indicate their method of construction, Oppermann used the word ‘Ensemble’. During her career Oppermann created over 70 of these Ensembles, generating a body of highly influential works that are still capable of interrogating and subverting the boundaries and practice of contemporary art and critiquing the ideological construction of the personal in society today. 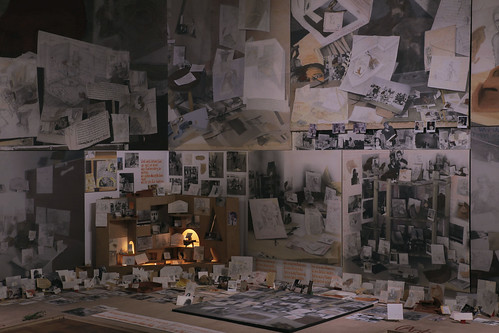 The exhibition is conceived from a specific curatorial intention bracketed by two key moments; a period when Oppermann started exploring her notion of  ‘Ensemble’ and later when she was established as a tutor at the University of Wuppertal and facing the conservative practices of academia. By drawing out the interrelation of the personal and the political in the development of Oppermann’s practice, this curatorial approach provides a context in which to situate a body of archival material that foreground the social and biographical factors informing her oeuvre. To correlate with the catalogues, personal notes, sketches, photographs, ephemera, the archival strand in the exhibition will feature a documentary film from the collection of the Center for Art and Media (ZKM) in Karlsruhe, Germany; made by the experimental German film maker Michael Geißler, it records Oppermann guiding her subject through the ensemble she produced in 1977 for documenta 6. 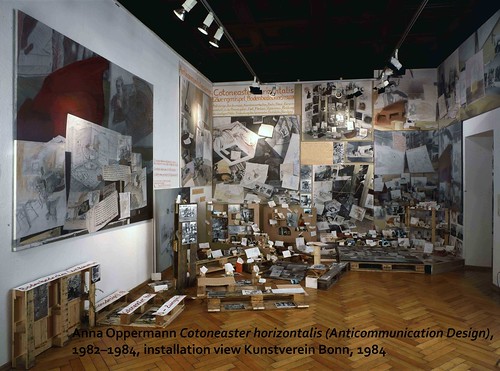 Process formed an integral part of Oppermann’s practice and she carefully produced an archive of material documenting  her production method. By drawing on the artist’s archival intention, the exhibition will explore how to activate archival materials within a discursive exhibition situation and the role of new technologies in archival practices. This new advancement in digital archival practices was produced in response to Oppermann’s complex ensembles by researchers from Leuphana University; Professor Martin Warnke and Carmen Wedemeyer. One of the outcomes of their research is a software suite, enabling the viewer to explore the artist’s extensive cross-referencing within her practice, which will be featured alongside the archival material.

Anna Oppermann: Cotoneaster horizontalis has been reviewed and previewed in a number of publications:

Laura Campbell reviewed the exhibition for this is tomorrow published on 5 December 2015. Please click the following link to read more:

David Pollock gave the exhibition 4 of 5 stars for The List published on 13 November 2014. The List also featured Anna Oppermann: Cotoneaster horizontalis in their 'Hit List' in issue 730.

David Pollock also previewed the exhibition for the Courier on 17 October 2014.

Jan Patience previewed the exhibition in her 'Gallery Round Up' for The Herald Arts published on 18 October 2014.

The Skinny featured the exhibition in 'This week in Scottish Art' published on 14 October 2014.

STV Dundee featured a preview of the exhibition published on 15 September 2014:

Anna Oppermann: Cotoneaster horizontalis will be the first major solo exhibition of Oppermann’s work in the UK and will form the largest presentation of her work in the country since her work was featured at the Serpentine Gallery in 1981. Oppermann received international recognition for her ‘ensembles’, which were presented in major solo exhibitions at Hamburger Kunsthalle, Bonner Kunstverein, and biennials including documenta (1977 and 1987) and the 39th Venice Biennale (1980). Since her passing in 1993, her work has been realised in major solo presentations at the MoMA PS1 (1999), the Generali Foundation Vienna (2007), 30th São Paulo Biennial (2012) and at Frieze Masters (2013).

Cooper Gallery would like to thank the estate of Anna Oppermann and Galerie Barbara Thumm.

We also thank Goethe Institut Glasgow for their kind support of the exhibition.

Cooper Gallery is open Monday - Saturday, 11am - 5pm, and can be accessed via the Cooper Gallery doors on the east side of the DJCAD car park.