A new performance conceived by Liam Gillick & Anton Vidokle was presented during the preview by award-winning Scottish actor Billy Mack.

Taken from the space missions of the 1960s, ALL SYSTEMS… go is the terminology of an irreversible act. Still used at the launch of space missions and ballistic missiles, this phrase has now entered the banal vernacular of project management and institutional administration. Wherever it is uttered, ‘all systems go’ implies that there is no turning back and no escape from what has been initiated.

Screened in a synchronised arrangement, the three moving image works in ALL SYSTEMS… go hollow out moments in unstoppable systems, underscoring the inescapable conditions of contemporary power infrastructure and its discourses. Enabling the discursive and the improbable, the compromise and the negotiation as disruptive practices, the featured works interrupt the hardwired trajectories that are pre-loaded into the systems propelling all aspects of our world.

The perfected choreography of a military drill unfolds in Miranda Pennell’s 2001 black and white film Tattoo, finding a senseless beauty in the repetition of stepping, running and marching in the interweaving movement of uniformed bodies. The absurd rituals performed in the artist’s film are the adornment of military action; the celebratory display of might and force which the state has relished proudly throughout history. The singular uniformed components in this synchronised undulating form rehearse to perfect their individual responsibilities within a systematic production. Through her attention to the details of the young men, Pennell flags up the fallible qualities of the human body – demonstrating the effectiveness of the armed forces, and ‘touching up’ the image of a system that is never phased by the unexpected or unanticipated. 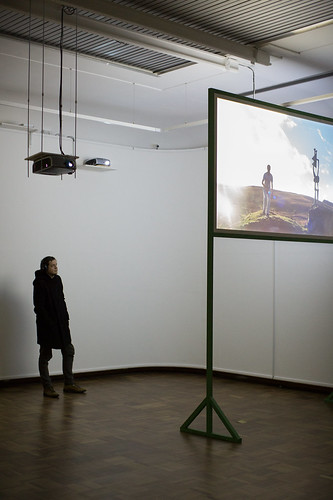 Dominic Watson creates an unforeseeable situation in his film Like A Rolling Stone (2012): the figure of the artist posturing on a hilltop in the Glenkiln Sculpture Park, shares the landscape with Henry Moore’s 1950 sculpture Standing Figure. Interrupting the tranquillity of the countryside, a Keith Richards guitar lick announces The Rolling Stones’ “Start Me Up” before Watson starts to Jagger… Two influences on aesthetic taste are brought into proximity with popular culture strutting into the frame of visual art. Despite his apparent irreverence, Watson’s moves resonate with Moore’s androgynous sculpture imbuing it with a strange new life.

A Guiding Light (2010) by internationally respected artists Liam Gillick & Anton Vidokle stages a revealing tableau of the art world system, that hovers between cultural criticism and soap opera. Borrowing its title from the longest running soap opera on US television, A Guiding Light takes as its starting point a manifesto written by the Executive Curator of the 2010 Shanghai Biennial, Gao Shiming. A seeming attack on the art system and its limiting monoculture, Shiming’s manifesto declares that the only escape route from the limitations of the art world is to withdraw. Responding to the manifesto Gillick & Vidokle invited emerging artists, curators and critics to interpret and extrapolate from Shiming’s ideas. Produced in front of seven cameras in a TV-studio, the making of the film itself is revealed and narrated by a purveyor of taste – an Art Forum critic.

Detouring into the unexpected, moments of negotiations and rehearsals of power, the three works in this exhibition disrupt and make transparent the ‘black sites’ lurking in all structures of power. By foregrounding the unpredictable within apparently perpetual and ceaseless systems, ALL SYSTEMS… go renders a glance into the complexities that vanish when the omnipresent systems governing our world run ‘smoothly’.

Documentation of 'The Incomplete Curator', a new performance conceived by Gillick & Vidokle for ALL SYSTEMS... go and performed by award-winning Scottish actor Billy Mack. 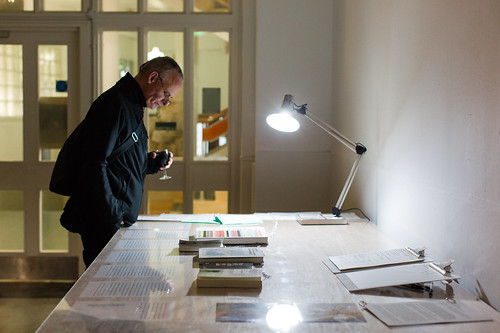 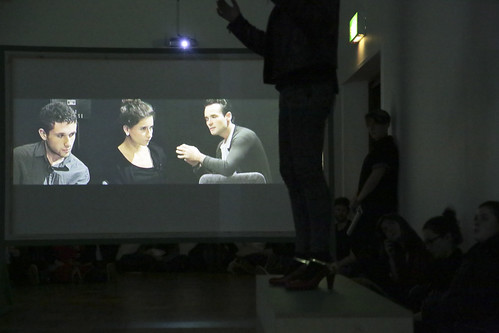 ALL SYSTEMS... go was reviewed by writer Alex Hethington for this is tomorrow published on 5 February. Read the article here.

Liam Gillick & Anton Vidokle are leading international artists who collaborated in 2010 to develop the film-work A Guiding Light for the 8th Shanghai Biennale which is exhibited in Cooper Gallery as part of ALL SYSTEMS... go. 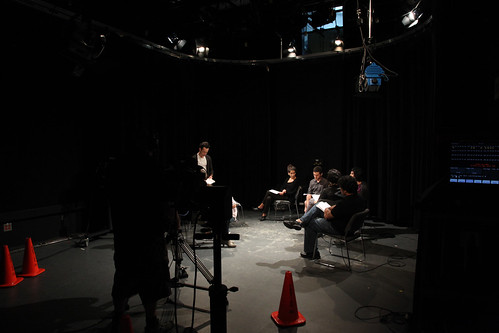 Liam Gillick is an artist living and working in New York City. Gillick holds a BA from Goldsmiths University of London.

Gillick deploys multiple forms to expose the new ideological control systems that emerged at the beginning of the 1990s. A number of key narratives that often form the engine for a body of work. Gillick’s work exposes the dysfunctional aspects of a modernist legacy in terms of abstraction and architecture when framed within a globalized, neo-liberal consensus. His work extends into structural rethinking of the exhibition as a form. He has produced a number of short films since the late 2000s which address the construction of the creative persona in light of the enduring mutability of the contemporary artist as a cultural figure.

Gillick’s work has been included in numerous important exhibitions including documenta, and the Venice, Berlin and Istanbul Biennales - representing Germany in 2009 in Venice. Solo museum exhibitions have taken place at the Museum of Contemporary Art in Chicago, the Museum of Modern Art in New York and Tate in London. Gillick’s work is held in many important public collections including the Centre Pompidou in Paris, the Guggenheim Museum in New York and Bilbao and the Museum of Modern Art in New York. Over the last twenty-five years Gillick has also been a prolific writer and critic of contemporary art – contributing to Artforum, October, Frieze and e-flux Journal. He is the author of a number of books including a volume of his selected critical writing. High profile public works include the British Government Home Office (Interior Ministry) building in London and the Lufthansa Headquarters in Frankfurt. Throughout this time Gillick has extended his practice into experimental venues and collaborative projects with artists including Philippe Parreno, Lawrence Weiner and Louise Lawler. Gillick is currently completing a book on the genealogy of the contemporary artist titled Industry and Intelligence: Contemporary Art Since 1820 for Columbia University Press.

Anton Vidokle is an artist and founder of e-flux, based between New York and Berlin. His work has been exhibited internationally, at Documenta 13, the Venice Biennale, Lyon Biennial and the Tate Modern. Working with e-flux he has produced Do it, Utopia Station Poster Project, and organized An Image Bank for Everyday Revolutionary Life and the Martha Rosler Library. Vidokle is co-editor of e-flux journal along with Julieta Aranda and Brian Kuan Wood. Vidokle was a resident professor at Ashkal Alwan’s Home Workspace Program (2013-14). Most recently, Vidokle has exhibited films in the Montreal Biennale and the Istanbul Biennial. His recent film, This is Cosmos (2014), has been shown at the Berlinale International Film Festival in Berlin, Witte de With Center for Contemporary Art in Rotterdam and the Shanghai Biennale.

Miranda Pennell is an artist and film-maker living and working in London. She originally trained in contemporary dance and later received an MA in Visual Anthropology from Goldsmiths, University of London.

Pennell has produced a body of award-winning film and video work that explores forms of collective performance, whether dancers, soldiers or fight directors. Her most recent moving-image work uses colonial archives as the starting point for investigations into the colonial imaginary.

Selected screenings and exhibitions of Pennell’s work includes mixed programs and group shows at Tate Britain (2014), Whitechapel Gallery (2015), Museum of Modern Art Vienna (2012) and Kunsthaus Zurich (2015). Her award-winning video Why Colonel Bunny Was Killed (2010) is published on DVD by Filmarmalade. The Host (2015), Pennell’s feature length film is based on the archives of the Anglo-Iranian Oil Company and will be touring the UK in spring of 2016. To find out more information about The Host, see The Host Website 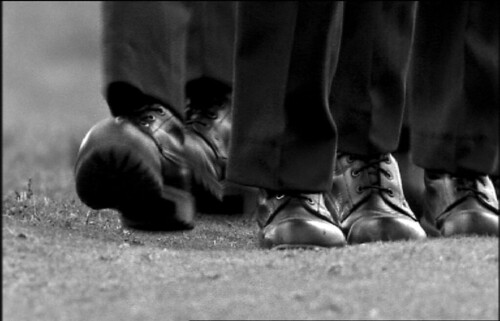 Dominic Watson is an artist living and working in Amsterdam. He attained a BA in Sculpture from Camberwell College (University of the Arts London) in 2005 and graduated from the MFA programme at Glasgow School of Art in 2014.

In an exploration of what he sees as a false sense of shared consciousness, Watson typically works with film and installation to reflect upon the definers of taste in visual, popular and everyday culture. Frequently appearing like a caricature of himself in his works, Watson creates absurd and unusual situations between his cultural influences. 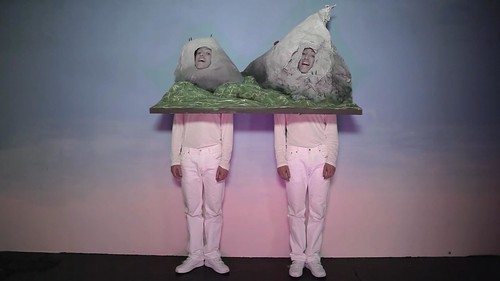 In 2015, Watson presented three solo exhibitions: Significant Culture II at BoetzelaerNispen in Amsterdam, Specific Emotions at New Studio London and Significant Culture at the Hutt Collective in Nottingham. He has participated in group exhibitions and screening events across the UK and internationally at organisations including, S1 Art Space in Sheffield (2015), Zona De Desgaste in Mexico City (2015), Sorbus Gallery in Helsinki (2015), 176 Zabludowicz Collection in London (2014), Paradise Row in London (2014), Outpost in Norwich (2013), One Thorsby Street in Nottingham (2012) and the Royal College of Art in London (2010). In 2013, Watson was selected for Bloomberg New Contemporaries and a selection of Watson’s films were included in the much acclaimed London Open 2015 at the Whitechapel Gallery. Watson was a finalist in the Catlin Art Prize in 2015.

Billy Mack is an actor who is currently part of The Rep Theatre ensemble in Dundee. Graduating from the Royal Conservatoire of Scotland (formerly known as the Royal Scottish Academy of Music and Drama) in 1995, Mack has since featured in major TV shows such as Taggart and Still Game, in addition to numerous theatre productions such as Hamlet and The Winter’s Tale. Nominated for Best Actor in the CATS Award in 2009 for his role as Morris Magellan in The Sound of My Voice, Mack is further the only actor to have won The Stage Award for Acting Excellence twice, both in 2009 and 2011.

Open: Monday - Friday 10am-5pm, Saturday 11am-5pm, Sunday Closed, and can be accessed via the Cooper Gallery doors on the right side of DJCAD.