A is for Avant-Garde, Z is for Zero: Laura Mulvey & Peter Wollen

Laura Mulvey and Peter Wollen are best known as film theorists and filmmakers. As writers, they made highly influential interventions in film theory such as Mulvey’s ‘Visual Pleasure and Narrative Cinema’ and Wollen’s ‘The Two Avant-Gardes’ (both 1975). Seeking cinematic forms that investigated and countered dominant languages of looking, signification and narration, Mulvey and Wollen made six films between 1974 and 1983 that engaged the viewer in a rigorous and still timely conceptual debate that brought into contact semiotics, feminism, psychoanalysis, alongside histories and theories of the avant-garde.

Mulvey and Wollen’s engagement with art and artists has always been a central dimension of their activities, exemplified by their numerous documentaries and ‘theory films’ about or featuring artists, critical writings, teaching, curating, their production of artworks, and their role as important interlocutors for artists. Incorporating moving-image works, audio recordings, drawings, diagrams, photographs and archival materials, A is for Avant-Garde, Z is for Zero maps the co-ordinates of two transdisciplinary, overlapping practices which includes collaborations and conversations with esteemed figures in art and culture such as Faysal Abdullah, Kathy Acker, Emma Hedditch, Mary Kelly, Mark Lewis, Yvonne Rainer and Kerry Tribe.

In addition to proposing that Mulvey and Wollen can be understood within the broader frame of artists and art theorists influenced by and contributing to the discourses of feminism and socialism, the exhibition utilises Cooper Gallery’s art school context to suggest their important role as teachers and the mutual influence between educational and artistic work.

Art historian Griselda Pollock stated that the 1970s can be understood as an ‘avant-garde moment’, characterised by overlaps and interactions between independent cinema, video art, conceptual art, feminist appropriations of psychoanalysis, and the reanimation of activist practices and reinvigorated production of theoretical discourses relating to gender and sexuality. The constellation of materials presented in the exhibition demonstrates how Mulvey and Wollen sustained the critical and innovative energies of the 1970’s beyond that decade, keeping the urgent inquiries inherent to this ‘avant-garde moment’ open.

The exhibition title, A is for Avant-Garde, Z is for Zero, alludes to Mulvey and Wollen’s interest in avant-gardes as models of cultural production, especially the Soviet avant-garde of the 1920s and post-revolutionary Mexican avant-garde. It also signals their ambition to anatomise and reinvent film language, and cites Wollen’s deployment of the alphabetic form in some of his essays, as well as the use of numbers and games as generative constraints in other writings and in Mulvey and Wollen’s films. The ‘zero’ of the title foregrounds Mulvey and Wollen’s desire to completely break with the past, to negate previous cinematic forms and start again from nothing, an aspiration succinctly crystallised in their work of the early to mid-1970s: the scorched earth of counter-cinema.

Curated by Oliver Fuke and Nicolas Helm-Grovas in association with Cooper Gallery.

Download the A is for Avant-Garde, Z is for Zero exhibition handout 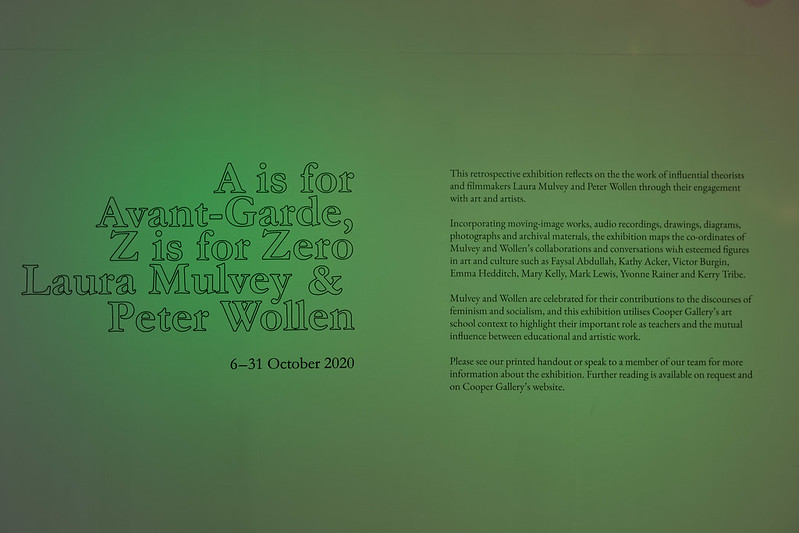 Laura Mulvey (born 1941 in Oxford) is Professor of Film and Media Studies at Birkbeck College, University of London. She was Director of Birkbeck Institute for the Moving Image (BIMI) from 2012 to 2015. She is the author of Visual and Other Pleasures (1989); Citizen Kane (1992); Fetishism and Curiosity (1996); Death 24x a Second: Stillness and the Moving Image (2006); and Afterimages: On Cinema, Women and Changing Times(2019). She has co-edited British Experimental Television (2007); Feminisms (2015); and Other Cinemas: Politics, Culture and British Experimental Film in the 1970s (2017). Mulvey made six films in collaboration with Peter Wollen, including Riddles of the Sphinx (1977), and two films with artist and filmmaker Mark Lewis.

Peter Wollen (born 1938 in London, died 2019) was a radical filmmaker, film theorist, and screenwriter, whose crucial book, Signs and Meaning in the Cinema (1969), continues to challenge and provoke. His other books include: Readings and Writings: Semiotic Counter-Strategies (1982), the alternative history of 20th century art Raiding the Icebox (1993), Paris/Hollywood: Writings on Film (2002), and Paris/Manhattan: Writings on Art (2004), all published by Verso, as well as a BFI Classic on Singin’ in the Rain (1992). He taught film at a number of universities and was Professor Emeritus at the University of California, Los Angeles. Wollen co-wrote the screenplay for Michelangelo Antonioni’s The Passenger (1975) and subsequently worked outside mainstream cinema, collaborating on six films with Laura Mulvey. His final feature film was a solo project, Friendship's Death (1987) starring Tilda Swinton as an alien who lands in Amman, Jordan, during Black September, 1970. His expansive interests included organizing paradigm-shifting art exhibitions, such as Frida Kahlo and Tina Modotti (with Laura Mulvey, 1982) and On the Passage of a Few People Through a Rather Brief Moment in Time: The Situationist International (with Mark Francis, 1989).

We are delighted to be re-opening and welcome you back to Cooper Gallery. To help us to keep you and others safe we have introduced new safety measures in line with Scottish Government and University of Dundee COVID-19 guidelines.

Our staff will be wearing face coverings within the gallery, observing physical distancing and guidance on regular handwashing. We have put in place additional cleaning measures including for all contact points within the gallery and wheelchair accessible toilet.

During your visit we would ask that you please:

·       Sanitise your hands on entry using the dispenser provided
·       Wear a face covering inside, unless you are exempt from doing so
·       Maintain 2 metres apart from other visitors and staff
.       Observe one-way signage in the gallery

Booking
The exhibition is free but ticketed. Please book one ticket for each person visiting.
Please book in advance selecting an available 1hr time slot on Eventbrite.
If you wish to extend your visit please feel free to book multiple time slots.

Access
The gallery is on two floors. First floor has ramped access and disabled toilet.
Second floor is accessible via lift and for wheelchair access via a stairclimber.
Large print versions of the exhibition information handout are available, please ask our Guides.

Due to additional safety measures please email in advance if you require lift or stairclimber access so we can arrange support.

*
The exhibition has been supported by funding from