a book is a performance

A Centre for Artists' Books exhibition co-curated with Lisa Otty

Artists and writers have engaged with the performative possibilities of the book for over a century, the French 19th century poet Mallarmé imagined his Le Livre emerging as a series of ritualised séances, whilst the modernist artist Marcel Duchamp’s Green Box staged the book in order to subvert its traditions. Drawing upon a broad range of contemporary works, a book is a performance follows Mallarmé’s desires and Duchamp’s lead and situates the book and the act of reading as a performative practice inscribed with gesture and action.

At the heart of the fascination with the book is its potential as a transformative space, in which identities and places can be unsettled. In Polaroid Portraits Richard Hamilton enters this mutable space and shows the ambivalence of portraiture. In the work of Viola Ye?iltaç photographs are used to directly mark, reorder and turn space into a fiction of her own. Ye?iltaç’s editorial control over space is echoed in the work of Sharon Kivland who organises postcards and historical images into unlikely and random categories, forming equivalences between disparate fictions, realties and histories. But it is not only space and identity that are subject to radical re-invention in the book, in Simon Morris’ Re-Writing Freud words and thoughts are recombined to generate different perspectives on the hidden depths of Freud’s practice of psychoanalysis. Alec Finlay adopts a similar approach in his work Mesostic Interleaved, which consists of a series of poems distributed randomly throughout a library collection: these ‘bookmarks’ reconfigure the reader's engagement with the collection, sending them in unexpected directions. Yet the book is inherently a material object and it is this persistent physical quality that provides the ‘binding’ of Helen Douglas’ Threads, in this work the book becomes a stage upon which a thread of thought literally wanders, weaving into, across and through its pages. The wandering and wondering capacity of thought and words is further traced out in the unfolding of the book into a live and public space in Cullinan Richards Savage School Window Gallery, whilst in the work of Nina Chua the book becomes a map of words that opens into the unknown.

The works in a book is a performance cumulatively reveal the book as the anchor point for riveting and radical forms of experience, in which a turned page can lead into an encounter with performative acts, gestures and beautiful subversions. But as Ulises Carrión, the seminal Mexican book artist put it “The most beautiful and perfect book in the world is a book with only blank pages, in the same way that the most complete language is that which lies beyond all the words that a man can say” and it is towards this ‘most complete language’ that this exhibition gestures. 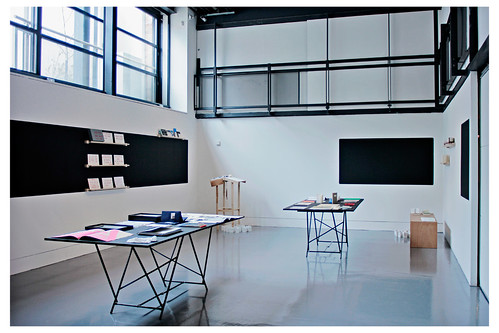 Photographs of I used to, by Sarah Sanders, taken by Ross Fraser McLean. 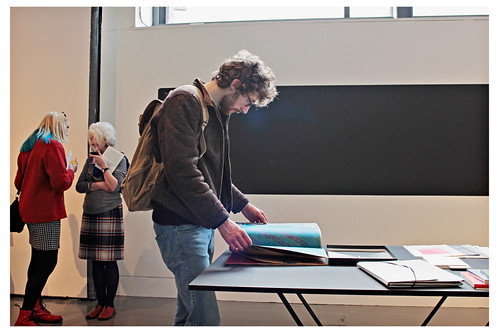 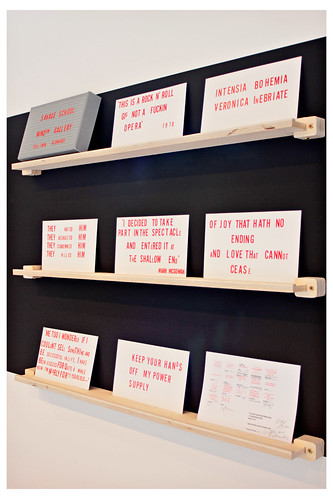 Photographs of the exhibition taken by Ross Fraser McLean.

To illuminate and evoke the printed page as a live space, the exhibition will be opened by Alec Finlay’s performance reading Out of Books and punctuated by a durational live performance I used to by Sarah Sanders.

The works featured in the exhibition are selected from the collection and recent acquisitions of CAB (Centre for Artists’ Books) at Visual Research Centre, Duncan of Jordanstone College of Art & Design. The exhibition is co-curated by Exhibitions at DJCAD and Dr Lisa Otty, an AHRC Early Career Fellow at The Centre for the History of the Book, University of Edinburgh.

More information about the two artists who will present live works as part of this project:

Alec Finlay is an artist & poet whose work crosses over a range of media and forms, from poetry, sculpture, and collage, to audio-visual, neon, and new technology. Much of his work reflects on human interaction with nature and considers how we as a culture, or cultures, relate to landscape and ecology. Through temporary & permanent structural interventions, integrative web-based projects, and participative in situ compositions, Finlay weaves together generous experiential artworks. He describes much of his work as ‘microtonal’, combining a family of elements within a wide field, for example letterboxes and nest-boxes, often bearing innovative poetic forms such as the mesostic, embedded-poem and circle-poem.

Recent projects have been developed with Yorkshire Sculpture Park, the 18th Biennale of Sydney and The Bothy Project. Other landmark projects include Specimen Colony (2008) for Bluecoat, Liverpool; The Road North (2010-12) with Ken Cockburn and the ongoing body of work Skying (2001–). Finlay has published over twenty books and has won two Scottish Design Awards, in 2012 he was shortlisted for the Artistic Landmarks in Contemporary Experience (ALICE) Awards. Finlay is artist-in-residence at University of Stirling.

Sarah Sanders’ practice is the act of drawing and performance. She alludes to the passage of time through action and intervention in a space. Cutting all the letters f, e, a and r from a newspaper and then blowing them over a balcony; writing for 24 hours streamed live over the World Wide Web; blurring the process of her work/production by repeatedly painting the words stop start.

Sanders has exhibited in St Gallen Switzerland and Helsinki and undertook a residency in China in 2009.

Visual Research Centre is part of Duncan of Jordanstone College of Art & Design and is located on the lower floors of Dundee Contemporary Arts, 152 Nethergate, Dundee, DD1 4DY