In the third instalment of the Two Night Stands Happenings, OAPAO will be revisiting the genre of the horror movie, borrowing its tropes and tensions to explore some of the themes sparked by an exhibition they produced in 2013, titled Phenotypic Plasticity. Working with film, writing, sound and performance, the potential power of the apparatus (both the tools and their operational frameworks) are split across the four perspectives of the makers. 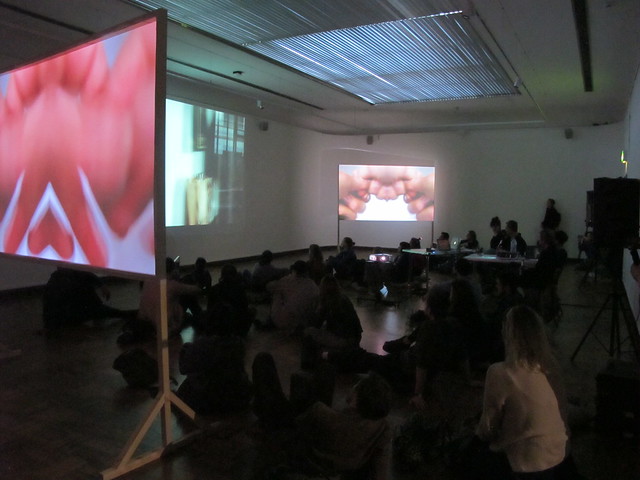 OAPAO is a collective of four artists working in Glasgow: Mark Briggs, Amelia Bywater, Sarah Forrest and Rebecca Wilcox. Their collaboration began in 2013 with the exhibition Phenotypic Plasticity, a project that involved a number of exchanges between the artists where only parts of works were made visible to each other. What developed was a sprawling, fragmented narrative through video, writing and sound works, of attempts to acknowledge each other or address something that lies out of the frame of sight. The position of ‘author’ became uncertain, dispersed or assembled from parts; placing the mechanisms that normally steer the movement of information into question. This work was presented as part of ReMap (2013), the biannual contemporary art festival held in Athens, Greece. A variation and re-edit of this project was compiled and presented by gas-tower in Carlton Studios, Glasgow, in October 2013 as part of Transmission’s Public Building exhibition programme. Since then, OAPAO have been making a horror movie.