Join us for the preview of Great Noises that Fill the Air, the first retrospective of influential artist collective Bow Gamelan Ensemble (Anne Bean, Paul Burwell, Richard Wilson) where Anne Bean and Richard Wilson present a newly developed live performance, in their new incarnation as W0B. 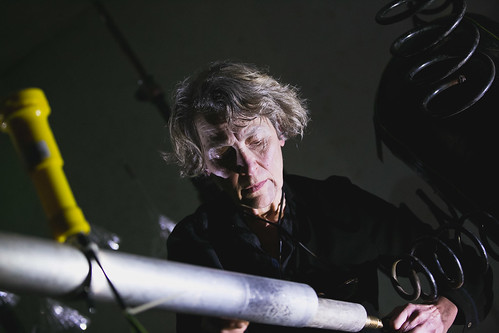 In the late 1970’s, Anne Bean, Paul Burwell (1948-2007) and Richard Wilson were enthralled by the range of aural poetry and parallel visions they encountered during numerous boat trips on the Thames. Bow Gamelan Ensemble, the group they later formed, originated at this juncture. For the next 10 years they worked on ideas to distil and extend these stimuli, ranging from jagged and harsh to haunting and lyrical, into events all over the world.

Wilson and Bean have since carried on working together as W0B in many contexts and modes, continuing to treat both sound and visuals as inter-relating sculptural forms in works such as Dark Haloes and Spooky Drums for Liverpool Biennale, the Red Jail, Iraq, the Maunsell Forts in Thames Estuary, London Contemporary Music festival and Shuffle festival, Bow.

For more information on the exhibition and Event Series see our website here.